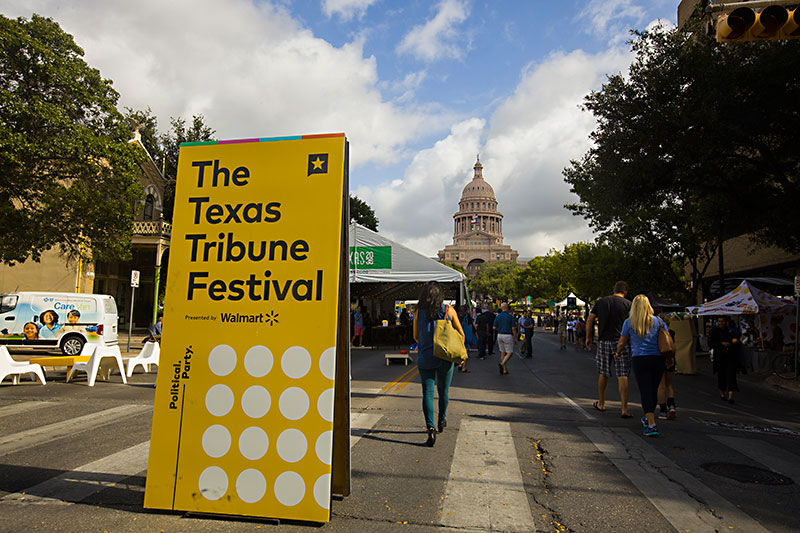 If politics is show business for ugly people (h/t Paul Begala), then the Texas Grandstands Festival is his ACL Fest. But it’s really more like a weekend homecoming, where everyone who just needs one more reason to come to Austin and call it “work” is flocking to town, rate the state of our tacos and barbecue, and marvel at how Texas manages to make itself relevant for every election cycle. You kinda need to take it live, that’s what we’re saying; After two virtual years that went pretty well but just weren’t the same, the festival is back in downtown Austin September 22-24. The last day includes the Open Congress street takeover (see sidebar), but the whole event is worth the cost, especially for students, for whom it’s only $50. (General admission is $269, with a discount for Texas Tribune supporters.)

When TribFest began rolling out its 2022 speakers and programs a few months ago, one could be forgiven for not being amazed, as many ordinary panels are must-sees – legislative overviews, deep dives into issues like health care or justice reform or immigration, candidate interviews in even years, the meat and potatoes of this kind of idea event and a useful business for people doing politics in Texas to win their life. Then everything changed! What seemed like a juiceless election cycle, rendered neutral by redistricting which sought to freeze current partisan divisions for the next decade and left no seats in play, is now up in the air because of the Dobbs decisionthe Uvalde massacre, the revival of Joe Biden’s fortunes and falling gas prices, and the realization that the entire state of Texas is in a severe climate and housing crisis, all of which brought in Austin in September before the midterms an opportunity to learn something new.

The Texas Tribune, which is free to read and only charges for this year-round event, is now well-connected in the idea-party circuit (TribFest takes place after Atlantic‘s festival and before the new yorker‘s) and can safely hold its closing keynote slot open long enough for it to be filled by Liz Cheney, which will return to prime time four days later at the next hearing on January 6, after an all-new stupid but also chilling Apesh*t scandal engulfed the political world. There are still virtual offerings, such as Thursday broadcast sessions (available on demand throughout the weekend) with America’s favorite nice old doctor. Antoine FauciWhite House Press Secretary once retired Jen Psakiformer leader of Planned Parenthood and first daughter of Texas Cecile Richardsand Mayor of New York Eric Adams. The center of the live festival is the Omni in Brazos and the Eighth, with programming also at the two nearby churches (St. David’s and Central Presbyterian), the offices of Capital Factory (also at the Omni) and various locations around the Capitol end of Congress Avenue. Here are some of the places we will be:

• Two programs on Friday featuring State Rep. Joe Moody, D-El Paso – one is a session on how a pro-life state should change its mindset Capital punishment (also featuring Rep. Jeff Leach, R-Plano and hosted by Keri Blakinger of the Marshall Project); the other is a current affairs session with Moody and the other two members of the Texas House committee investigating Uvalde, Rep. Dustin Burrows, R-Lubbock and former Supreme Court Justice (and unsuccessful Attorney General nominee) Eva Guzman. The panel will discuss “what they know and how they know it”; Will Director of the Texas Department of Public Safety Steve McCraw do you still have work to do here? (There’s also a Saturday morning session from El Pasoans that focuses on how communities are recovering from mass shootings.)

• One of our favorite subjects, the Texas boom and blues suburb, will be worked on Friday by a panel moderated by our friend Steven Pedigo, director of the LBJ Urban Lab at UT-Austin. Often panels like this are only filled with politicians from the areas in question, but this one has experts in land use, public finance and planning as well as politicians, so it will be fun.

And this one from Saturday probably needs no elaboration: “Mississippi Today Presents: Mississippi Is the Future of Texas.”

• If you are interested in cross-domains of Faith and public lifeyou’ll want to check out the one-on-one with theologian Russell Moore, recently on hiatus from the extremely troubled Southern Baptist Convention, interviewed by New York Times religious correspondent Ruth Graham.

• Here’s a switch: why not ask some black Texans if they think little white kids are brainwashed into a poisoned revival by critical race theory in schools ? Capital B, a news site focused on black issues, is convening a Saturday afternoon panel to examine what Black Texas educators, parents and policymakers have to say.

• And of course, Liz Cheney. She’s still pretty awful, but she has a more credible claim to being a third-party contender in 2024 than Andrew Yang. Will she announce that she is showing up? How much of the session will be spent trying to get him to commit to a 2024 campaign? Stay tuned.

Find the complete program on festival-platform.texatribune.org/agenda.

Paid admission to the 2022 Texas Tribune Festival is pretty affordable for a national-caliber festival of ideas — $269 for general admission, less if you’re a Tribune member, and significantly less if you’re a student or teacher. But if it’s even more than you want to spend listening to Ted Cruz’s great takes and Cancun travel tips, you can still find yourself face to face with the political powers and rising stars of Texas for nothing. more than the price of shoe leather.

The free sessions of the Congress open on Saturday September 24, will occupy a series of tents on Congress Avenue between 7th and 11th Streets, near the main festival venues (the street will be closed, so plan your travels accordingly). The program begins with a discussion on the future of The Texas Power Grid (9am, Texas monthly Tent) featuring energy executives from Vistra, Jupiter Power and Hunt Energy Network, if you’re worried about a repeat of 2021’s Winter Storm Uri.

A host of candidates for congress also speaking in the November election will include Republicans Wesley Hunt and Morgan Lutrell of Houston and Monica De La Cruz of McAllen, and Democrats Greg Casar of Austin and Jasmine Crockett of Dallas (Republicans, 11 a.m. and Democrats, 12:30 p.m.; Punchbowl News Tent). Other than De La Cruz’s close race against Democrat Michelle Vallejo for the purplish 15th district, all should win easily. Rep. Henry Cuellar, D-Laredo and former Texas House Speaker Joe Straus, R-San Antonio, will also discuss the possibility of govern from the center (12:45 p.m., Texas monthly Attempted).

Individual talks with the Chairman of the US House Intelligence Committee are also on the agenda. Adam Schiff, D-California. (9:30 a.m., Punchbowl News Tent) and US Surgeon General Vivek Murthy (2:45 p.m., healing tent). If you want to hear non-politicos express their own version of the Open Congress vibe, you can catch the Grammy-winning singer-songwriter Lyle Lovett (2:15 p.m., Lonestar Tent) and saturday night liveit is Alex Moffat (3:45 p.m., Lonestar tent) in the afternoon. More details online at festival-platform.texatribune.org/agenda. – Claire Stevens

Do you have something to say ? The the Chronicle welcomes opinion pieces on any topic from the community. Submit yours now at austinchronicle.com/opinion.