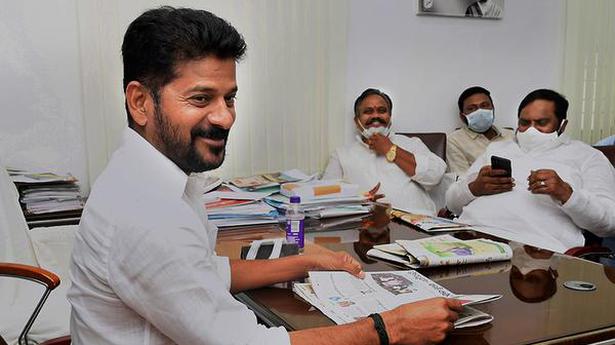 Chairman of Telangana Pradesh Congress Committee (TPCC) and MP for Malkajigiri A. Revanth Reddy has alleged that Chief Minister K. Chandrasekhar Rao is forging ahead with unwavering determination to distance education of the poor , including closing schools in the name of the spread of COVID-19 when there were no deaths with infection in schools.

In an informal conversation with reporters here on Tuesday, he observed that the Chief Minister was deliberately misleading people with decisions such as setting up a Cabinet sub-committee on fee controls in schools instead of implement the Right to Education Act (RTE) in letter and spirit. under which 25% of admissions would go to the poor without any donations or exorbitant fees.

The government’s only response on the implementation of RTE so far has been that it is implementing a policy of free education from KG to PG, the TPCC chairman said and sought to know the justification for the decision of the government to offer education in English from the next academic year. when there were no teachers and no recruitment for a long time.

Criticizing the government’s decision not to reopen schools after the Sankranti holidays, Mr Revanth Reddy sought to know the logic behind the closure of schools when there were no fatalities among infected pupils in the schools and allowing the unrestricted operation of pubs and restaurants when there have been deaths among those infected in pubs.

The education system, from schools to universities, in Telangana has been crippled under the TRS regime, he alleged and said the allocation of funds for education was an expense in the opinion of the chief minister then that it was an investment from the company’s point of view.

This is the reason why the chief minister was denying educational opportunities to the poor and instead giving them sheep and buffaloes, he observed.

The TPCC chief also expressed his disappointment with Chinna Jeeyar Swamy Ashram for sending him an invitation for the unveiling of a statue of Ramanujaswamy and a temple with an employee of a real estate company instead of a Ashram official. He observed that real estate businessmen alongside Chinna Jeeyar Swamy would only create doubts among people, though he has immense respect for the seer.