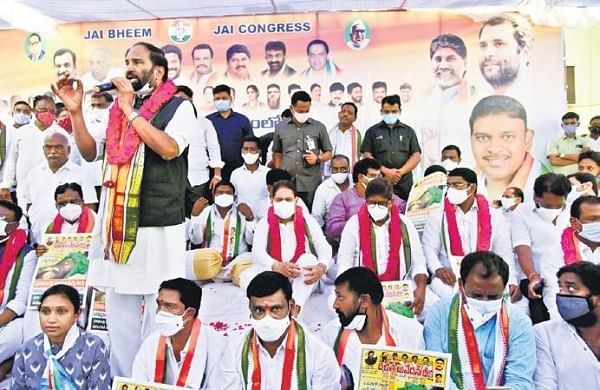 HYDERABAD: The decision of the All India Congress Committee (AICC) to hand over the post of chairman of the Telangana Pradesh Congress Committee (TPCC) to A Revanth Reddy came as a shock to loyalists. While some refrained from commenting on developments, others even decided to quit the party.

When the New Indian Express reached out to party and MLC veteran T Jeevan Reddy, the leader declined to comment on the development and said, “I don’t know.”

Some others turned off their phones and stayed out of range. Meanwhile, former Medchal MP and local Revanth rival, K Laxma Reddy, resigned from the party and sent a letter to AICC President Sonia Gandhi. Laxma Reddy is likely to join the TR S or the BJP.

MP Komatireddy Venkat Reddy, who was the main candidate for the post, remained in Delhi, even as Revanth arrived in Hyderabad with the good news.

Revanth met senior leaders K Jana Reddy and Mohammed Ali Shabbir at their residences. Questions arise as to how a man like Revanth will be able to lead a team of active presidents, given the experience and potential of leaders like former cricketer Mohammad Azharuddin.

Sangareddy MP T Jayaprakash Reddy, who had also claimed the top post, was inducted as sitting chairman. Jayaprakash will now have to work on the relationship with the new president of TPCC.

Rendi Wagner could be re-elected to SPÖ congress