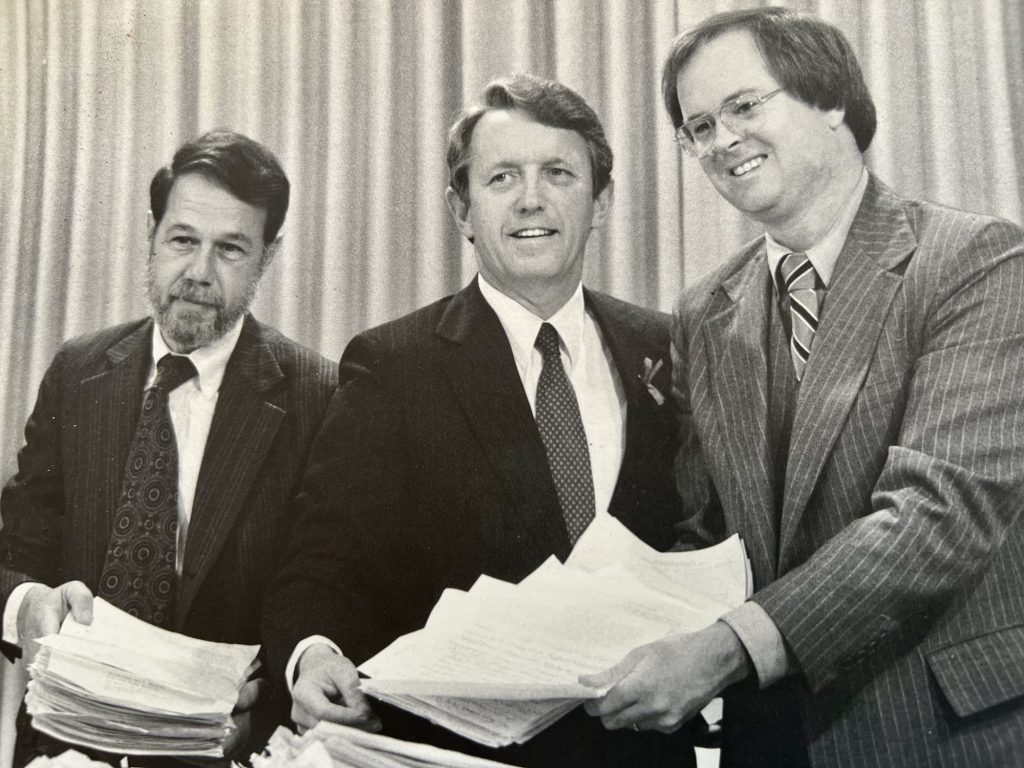 Monterey Bay, the largest open bay on the California coast, is where ocean politics began. From the first Spanish explorers discovering the beauty of our coastline to the creation of the Monterey Bay National Marine Sanctuary, our waters have been controversial.

There are four parts to the story of protecting Monterey Bay and the Central Coast. The first is the discovery and effort to stop the sale of 53 offshore oil leases. The second is the discovery and promotion of marine sanctuary status for Monterey Bay and the Central Coast. The third is to choose the “whole enchilada” or the largest possible limit, to ensure complete protection, and set up his office, staff, and sanctuary exploration center. The fourth is the effort to enact a national standard for the protection of the oceans, as had been done for clean air and clean water. The latter is still a work in progress for the nation, but we show how to do it right here in Monterey Bay.

Operation of the bay

Ocean Law policy began in Monterey with the construction of the Custom House (California’s #1 historic property) where all merchant vessels had to check in before doing business in California waters. The sea was the only way in or out for decades before the Overlanders arrived; The Monterey Bay was the economic portal.

For more than 100 years, the state’s economy was based on exploiting the resources of the sea. It began with harvesting sea otters and seals for their fur, using ocean passages to ship hundreds of thousands of cowhides from mission ranches and establishing major whaling operations around Monterey Bay – California’s whaling capital. From the early 1900s until the 1950s, Monterey was the sardine capital of the world. All of this revenue for economic prosperity left sea otters nearly extinct, bankrupted Cannery Row, and pushed to build oil refineries in Moss Landing with access for tankers to service the “Mighty Mo” power station. from PG&E.

Monterey Bay, one of the largest near-shore volumes of water in the world due to the depth of Monterey Bay’s submarine canyon, was sinking rapidly. This degradation is the result of more than 100 years of political decision-making.

The driving force behind ocean protection was the threat of offshore oil drilling. For Northern California, the emergency came in the late 1970s. I was chairman of the Monterey County Board of Supervisors when I got a call from my good friend and neighbor, the late Jim Rote. At the time, Rote was working on marine biology policy in the state legislature. Rote then took a temporary job in Washington, DC, working with the National Marine Fisheries.

Rote told me that the Department of the Interior was about to announce a tender to oil companies for oil exploration off the central coast of California. My response was “That’s crazy, there’s no oil off our central California coast.” Jim said, “Wait and see how the oil companies answer the call.” This tender has been named Lease Sale 53 and more oil companies have expressed interest in this lease opportunity than any previous tender.

The news broke and people got on the roof and our central coast mobilized. Protecting our coastline was a great organizational tool; all political leaders in the region opposed the leaseback 53. The chambers of commerce catalyzed opposition from the tourism industry and farmers due to threats of air pollution and oil spills. I think it was the first time that such diverse interests were all on the same page in opposition to an economic threat to our region.

Meanwhile, Jimmy Carter was president. It was facing the worst energy crisis in modern history. California had gasoline rationing with record-breaking lines at gas stations. Everyone needed gasoline and diesel fuel, especially farmers in the breadbasket of the Midwest. For most of the country, the news of expanding oil drilling was good news, but not for California. Our coastline was our center of population and economic development. Coastal tourism and coastal agriculture were huge. Even the fishermen were on our side to stop the sale of lease 53. It was the central coast against the rest of the nation.

Local leaders have mobilized. Photographer Ansel Adams ran ads in The New York Times opposing the high risk, low fuel payoff that would come from drilling. Our cry was heard by the White House, and through local connections, Interior Secretary Cecil Andrus came to Monterey to hear our concerns. I still have a copy of the T-shirt I gave him that said “Stop Lease Sale 53”. He saw a united front and listened. It worked and President Carter removed the 53 lease sale. We won, but not for long.

Ronald Reagan defeated Jimmy Carter in 1980. His new Home Secretary was James Lee Watt. Secretary Watt immediately announced that the entire California coast was up for lease. We set to work with our already well organized regional opposition. This time with the California Legislature and our California Congressional Delegation, led by Congressman Leon Panetta. We needed time to convince our former Governor of California, now President Reagan, to stop Secretary Watt’s call to “do baby exercises” off our coast.

Panetta organized a group of coastal congressmen to help. Congressman Vic Fazio, who served on the powerful House Appropriations Committee, was asked to insert language in the annual appropriations bill to prohibit the Interior Department from spending money this fiscal year. for the sale of lease; this action temporarily halted the process. This approach to stopping the sale of the lease was to be repeated in Congress every year with no guarantee that it would succeed.

In my next episode: Work begins on a marine sanctuary, the fight against offshore oil continues and puts the ocean at the top of the national agenda.

Sam Farr is a board member of the Monterey Bay National Marine Sanctuary Foundation. He served on the Monterey County Board of Supervisors, the California State Assembly, and represented California’s Central Coast in the United States House of Representatives. He also served as a Peace Corps volunteer in Colombia in his youth. He lives in Carmel with his wife, Shary. To learn more about the sanctuary’s 30th anniversary, visit montereybayfoundation.org.

The Monterey Bay National Marine Sanctuary celebrates its 30th anniversary this fall, and the national sanctuary system celebrates its 50th anniversary. Ahead of the anniversary, the Herald features articles by former US Secretary of Defense Leon Panetta, as well as Sam Farr, Dan Haifley, Fred Keeley and Sanctuary Superintendent Dr. Lisa Wooninck. All of these contributors serve on the board of directors of the Monterey Bay National Marine Sanctuary Foundation and participated in the designation of the sanctuary. For information, visit montereybayfoundation.org