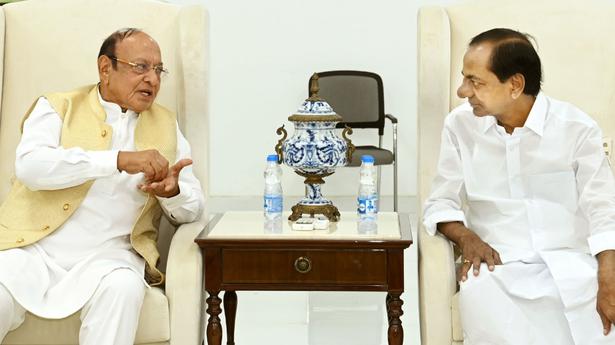 Chief Minister K. Chandrasekhar Rao said he would continue as chief minister while playing a role in national politics to bring about qualitative change in governance.

He gave the assurance to former Gujarat Chief Minister Shankersinh Vaghela during a five-hour long meeting here on Friday.

Earlier, Mr. Vaghela expressed the full support of senior leaders like him at the national level for Mr. Chandrasekhar Rao’s efforts to push back against the atrocious policies of the Bharatiya Janata Party (BJP). In fact, he was sent by them after consultations to welcome Mr. Chandrasekhar Rao into national politics because his services were in need.

The leaders were anguished over the BJP’s selfish politics and its consequences on the people of the country. There was opposition to Prime Minister Narendra Modi’s divisive administration and political agendas across the country. It was not right for progressives to remain silent spectators at this point.

There was an autocratic rule in the Center marked by the abandonment of the federal organization of the country. Senior leaders like him were helpless in the face of the situation because they didn’t have the right person or the right platform to stem the rot. “At this point, you came across as a beacon of hope that influenced us,” Mr Vaghela reportedly said.

Mr. Vaghela praised Mr. Chandrasekhar Rao’s commitment to taking Telangana to greater heights despite the obstacles created by the Centre. The Center had instigated fear among the leaders of all non-BJP ruled states in a bid to see them surrender. Therefore, it was time to end the Center’s anti-secular and anti-federal policies that were an affront to religious and regional harmony.

He urged Mr. Chandrasekhar Rao to use his experience in the state movement for the country. He also said Congress was unable to provide the right direction to control the BJP as it failed to get other parties on board.