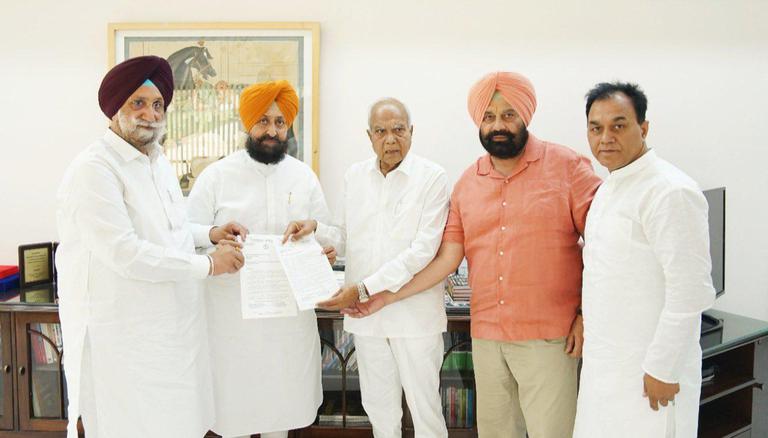 The AAP’s problems spilled over into Punjab as the Congress party demanded a CBI investigation into the alcohol policy drafted by the Bhagwant Mann-led government. A delegation led by Punjab opposition leader Partap Singh Bajwa submitted a memorandum in this regard to Governor Banwarilal Purohit on Thursday. According to the party led by Sonia Gandhi, the new policy caused a huge loss to the state and rendered local shopkeepers jobless.

The memorandum alleged: “This policy has been tailor-made to suit a few entrepreneurs close to the powers that be. The Punjab liquor policy enacted by the Punjab government is the replica of the Delhi liquor policy, where huge benefits with the monopoly was granted to a few select people.On the contrary, the policy was written by the same person, who is now the mastermind of Delhi’s alcohol policy and is facing the CBI and ED investigation .

This was a reference to Deputy CM of Delhi, Manish Sisodia. Congress demanded: “We sincerely ask you to order a CBI investigation into the liquor policy of Punjab because, as in India, it will reveal so much wrongdoing and how much money has been exchanged between those who made the policy and those who benefited from it. Furthermore, the new liquor policy has rendered local Punjabi traders completely jobless, as the trade is now controlled by foreigners, with undue government patronage”.

In July, Delhi LG VK Saxena recommended a CBI investigation into the Arvind Kejriwal-led government’s excise policy of 2021-22. Implemented on November 17 last year, the policy involved retail licenses being issued to private bidders for 849 sales across the city divided into 32 zones. However, many liquor stores did not open because they were located in the unconfirmed areas of Delhi and they were sealed by the respective municipality. The BJP and Congress had opposed this policy and had also filed complaints with the LG.

Saxena based its recommendation on the Chief Secretary’s report submitted in July, which found that the policy prima facie violated the GNCTD Act 1991, Transaction Rules 1993, Delhi Excise Act-2009 and Rules of Delhi Excise-2010. Apparently, there were “deliberate and gross breaches of procedure” to provide “undue advantages to liquor licensees” after the tender. Additionally, sources said the Excise Department’s decision to waive nearly Rs 144 crore owed to liquor vendor owners has also been scrutinized.

On August 19, the CBI raided 31 locations, including the official residence of Manish Sisodia in the nation’s capital. Subsequently, the AAP alleged a political vendetta and accused the BJP of trying to poach its 40 MPs by offering them Rs 20 crore each. Moreover, he argued that Sisodia was asked to split the AAP and join the BJP instead of having the charges against him dropped, a claim denied by the saffron party.