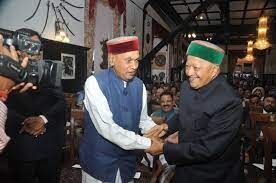 Cold winds blowing through the hills and the passionate efforts of political workers compete in Himachal Pradesh. The election campaign is now entering its final phase here. The ballot is scheduled for November 12, and there are barely two weeks left for potential candidates.

Conducting elections in the state has always been a challenge for Election Commission officials, not because of a threat to law and order, but because of the challenges posed by the difficult terrain and weather conditions. difficult. This is the time when winter begins to set in and some of the highest mountains are already putting on the white coat.

The upcoming polls are the first where there is no heavyweight or ‘super heavyweight’ chief ministerial face leading either of the two traditional rivals, the Congress and the Bharatiya Janata Party (BJP). ). Until previous polls, while it was leaders such as Dr. YS Parmar and Virbhadra Singh who led the big old party, the saffron camp was led by figures like Shanta Kumar and Prem Kumar Dhumal.

The 2017 elections saw an elderly and ailing Virbhadra Singh lead the Congress while it was Dhumal at the forefront of the BJP camp. Both had left the constituencies they represented.

Ironically, Dhumal lost from Sujanpur despite being the main ministerial face of the party while Virbhadra had won over Arki. Congressman’s Virbhadra Singh died last year, and this time Dhumal was denied a ticket by the BJP

Chief Minister Jai Ram Thakur has yet to “graduate” to their stature. He is often referred to as an “accidental” chief minister given the circumstances under which he was appointed to the post after the BJP swept the latest Assembly polls in the state. Observers point out that he is leading the BJP charge more as a leader of the House than as a popular CM.

Congress, meanwhile, is moving forward under the model of collective leadership and fireworks are expected if it manages to secure a majority. There have been some very interesting developments in the election race so far.

The first is that Congress and the BJP have witnessed rebellions and defections. Although these processes have been widely associated with Congress in the past, they have also come to harass the BJP. The BJP is a force that has always prided itself on calling itself a disciplined cadre-based unit apart from being “a party with a difference”. Its detractors now call it a “party with differences”.

“The Congress was seen as a fragmented force in groups since long before, but it is factionalism within the BJP that has come to the fore in ticket distribution and the rebels are rearing their heads. Anyone who has an understanding of the affairs of the The BJP can see how the ‘Dhumal group’ has been decimated and it is the group loyal to the national chairman of the party, Jagat Prakash Nadda, who decides,” an observer pointed out.

There was a lot of drama and emotional outpouring. Ram Lal Thakur, one of the most senior congressional leaders, struggled to contain his emotions when he left his post as vice president of state unity, pointing the finger at leaders pulling the party in different directions. Some BJP leaders have been seen in the same mode recently. Thakur had said he would continue to work as head of the election management committee.

Union Minister Anurag Thakur was also unable to control his emotions and tears last week as he addressed the people of Sujanpur. This is the constituency from where Dhumal, his father, lost in 2017 and wanted to run again this time. However, the party chose to field Ranjit Singh and Anurag had come to seek support for him. His voice trailed off as he spoke of Dhumal’s commitment to the people, the party and the organization.

Then it was incumbent Bilaspur MP Suresh Thakur who reportedly cried when he was denied the ticket despite being close to Nadda. The party instead fielded its protege Trilok Jamwal who was also the prime minister’s political adviser.

There was also an emotional outburst from BJP’s Praveen Sharma who applied as an independent in Mandi after being denied a ticket. In his strong social media post, he said: ‘Praveen symbolizes thousands of workers of any political party based on which you come to power and then ignore the same workers.’

It remains to be seen how many rebels the two main political parties are able to pacify by the time the votes are cast.

Another interesting story that has emerged in the election campaign so far concerns the personality of former Prime Minister Indira Gandhi. Many observers believe that Congress workers repeatedly refer to him in a sustained effort to present a strong personality to counter the current image of Prime Minister Narendra Modi that BJP workers have marketed.

It was at Congress leader Priyanka Gandhi’s Solan rally where she launched the party’s poll campaign that the slogan “Priyanka nahi yeh aandhi hai, doosri Indira Gandhi hai’ (It’s not Priyanka but a tornado, she’s the second Indira Gandhi) sounded. Congress veterans had toured the city to remind residents of Indira Gandhi’s last rally at the same location as Thodo Ground. Even Priyanka in her speech had made several references to Indira’s love for Himachal and her respect for honest and hardworking people in the state.

Interestingly, it was a former BJP minister who referenced Indira Gandhi on social media in the context of Anurag Thakur’s emotional outburst in Sujanpur.

“Leaders must keep their courage even in adverse circumstances. In this context, the example of former Prime Minister Indira Gandhi ji is very inspiring. Sanjay Gandhi’s death was in a plane crash. Indira ji maintained his patience even in this very sad moment.

“Although it is very difficult for a mother to have such patience at such a time, she controlled herself and refrained from crying. When a reporter asked her about it later, Indira’s response ji was that i could cry as a mother but as a prime minister, my crying might hurt the dignity of the prime ministership. It is expected that leaders can learn from this example of Indira ji,” wrote Mohinder Nath Sofat, who was a minister in the BJP government led by Shanta Kumar in the early 1990s.

The BJP’s slogan for its “Mission Repeat” is “Naya Riwaz Banayenge, Phir BJP layenge” (we will start a new tradition by re-electing the BJP). Jai Ram Thakur said, “The country’s history testifies to the fact that Congress has always cheated the people for power. When he was in power, the emphasis was on scams and the destruction of the country rather than the public welfare. tradition and give an appropriate response to congressional leaders.”

Congress, on the other hand, has called for change in the face of an “ineffective” and “unpopular” BJP government in the state. As the chairman of the party’s intellectual cell, Vijay Pal Singh, said, “This is not a vote to change the ‘Satta’ government but the ‘Vyavastha’ system.”

Previews of the 50th International Congress of