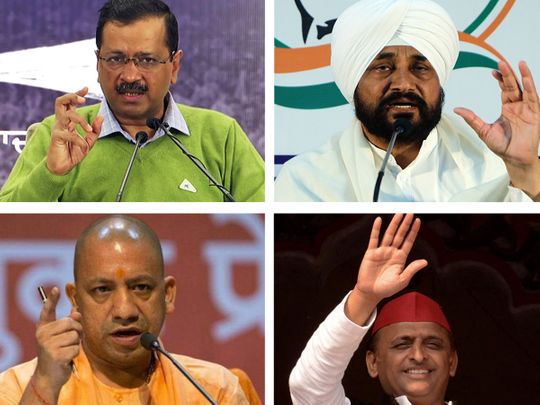 Elections 2022: Indian politics could enter a turbulent phase after March 10

It is fascinating to see that the short-term fate of the Congress and the Bharatiya Janata Party is closely tied to Punjab, India.

Of the five states that recently went to the polls, Uttar Pradesh and Punjab are likely to profoundly influence national politics.

From the micro and macro developments within UP and Punjab, it looks like India is poised for a period of political turbulence until the 2024 Lok Sabha elections.

There are four possible scenarios here among other possibilities:

If the Congress loses Punjab, the party will implode internally and the Nehru-Gandhi family will be forced into a merciless battle for survival. The Congressional rebel group, the G-23, will also be reactivated after the March 10 results.

More importantly, Congress would lose its bargaining power in any post-election opposition politics.

Right now most analysts think there is a “protest vote” in Punjab and people want to get rid of the tried and tested Congress and Akali Dal.

The rise of the AAP

There is a kind of political demand from voters to provide decent services – be it hospitals, schools and civic services without corruption. This is central to the rise of the AAP in the state. Not to mention that in Punjab, Prime Minister Narendra Modi’s approval rating is low and has not helped his party’s electoral fortunes at all. This is an added advantage for the AAP newcomer.

Arvind Kejriwal is a bush shirt-wearing politician who likes the image of an uncorrupted ordinary man.

For such a leader, capturing the imagination of voters in a culturally rich and religiously significant state is a political turning point. It will be a stunning revolutionary success even if the AAP emerges as a single party but without a simple majority.

Punjabi food habits, dress sense and music influence traditional India. Imagine how enormous the accumulated frustration of these unruly peoples must be to reject parties that have a long history of religion-related politics.

Since the birth of Punjab in 1966, the religious significance of Sikhism has been central to state policy. The victory of the AAP will change this fundamental of politics.

In such a unique state, the emergence of the AAP is an amazing proof of the churning that is going on in India. AAP founder and leader Arvind Kejriwal built his goodwill by effectively managing urban civic services in New Delhi and generously defeating the BJP twice – against all odds. Should the AAP win Punjab, it would continually be at odds with the BJP and Prime Minister Narendra Modi’s government.

Kejriwal never had a full state under him. But, with the politically strained state of Delhi-adjacent Punjab under his rule, he can nudge Modi and the BJP on a daily basis.

Kejriwal style politics will also be reflected in other states including Gujarat.

On the one hand, a victorious Kejriwal will hit Mamata’s outlook and position on the anti-BJP front and also hurt Congress in BJP-led states.

However, members of Congress are hopeful of retaining the state as vote percentages have been lower than expected and they also expect ‘vote shifting’ from other parties who want to stop the AAP from taking the power.

For the BJP’s ‘nuisance value’ against Kejriwal is less worrisome than the default advantage of having Congress as the main rival in a general election.

If the Congress loses Punjab and Uttarakhand and fails to win even 10 UP seats, then Sharad Pawar, Mamata Bannerji, MP Stalin, Uddhav Thackeray, leftist parties, Tejaswi Yadav and Akhilesh Yadav could stand come together to ensure that Congress is reduced to its size.

If Congress does not lead the united opposition’s anti-BJP force, it will be difficult for the BJP to continue with its standard rulebook on saffron politics and political campaigns based on Hindu identity. Because once the regional forces are energized, each Lok Sabha headquarters will acquire its own caste-based agenda and fights.

Mayawati of UP, Chief Minister Naveen Patnaik of Orissa and CM YS Jagan Mohan Reddy of Andhra Pradesh may not join the anti-BJP front before the 2024 elections, but after March 10 he there will be rapid developments if the Congress loses Punjab and behaves unimpressively. elsewhere.

In UP, although there is no strong wave, it is clear that a bipolar contest is taking place between SP and BJP. The two sides are engaged in a fierce battle over each seat, with the BJP having an advantage in Purvanchal. But it is very visible that the BJP is nervous and walking a tightrope.

If the BJP loses Uttar Pradesh, Congress and the rest of the opposition can rejoice as it will give them a huge psychological advantage. In the long run, this will make their fight harder with the BJP elevating Hindu identity politics to a new level.

Also, it will force the ruling party to rethink delivery and gaps in deliverables.

If the BJP wins UP then it is likely to be more haughty in its pursuit of power and will soon turn to Maharashtra and other states where it is weakened or weakened or in southern states which are not traditionally BJP states.

Postscript: In case the Congress wins Punjab and the BJP wins UP, the Safran Party would feel more secure for the 2024 Lok Sabha elections.

Sheela Bhatt is a veteran Indian journalist. She is based in New Delhi.