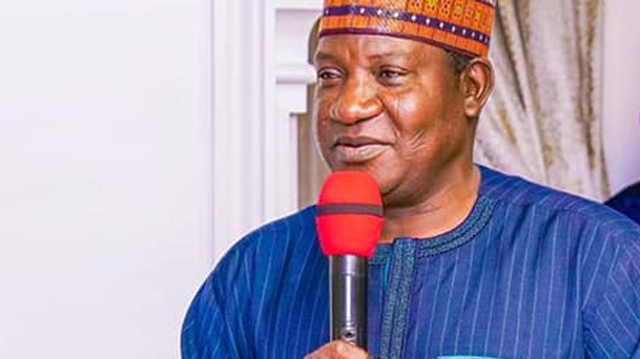 One group, Concerned Catholics in Nigeria, has warned Plateau State Governor and chief executive of congressional presidential campaign organization All Progressives, Simon Lalong, against dragging Pope Francis and the Catholic Church in Local Politics in Nigeria.

The organization was responding to a comment made by Lalong on Wednesday, where the governor said he had yet to receive any direction from the government to reject his recent nomination to lead the campaign for a Muslim-Muslim ticket.

Speaking to reporters in Abuja on Thursday, the group’s national leader, Ben Amodu, said Lalong’s reference to the pope was in poor taste and a childish attempt to drag the Catholic Church into a matter that has no relationship with the pope.

According to Amodu, the governor’s statement was also an attempt to provoke a crisis of unimaginable proportions in the country and also to distract and divide the Christian community which vehemently rejected the same ticket of faith from the APC.

The group therefore called for the suspension of the governor of the Catholic Church “for having discredited the Church and slandered the name of the pope for his benefit and that of his party”.

He said: “It remains a shame that politicians will stop at nothing to win elections, even at the expense of selling their birthright for a plate of porridge, as in the case of Governor Simon Bako Lalong, who after having agreed to be the CEO of the Presidential Campaign Council, elected to justify his actions using the Pope’s name.

“We find it hard to believe that Governor Lalong would find it morally convenient to drag the Pope and the entire Catholic community into the APC policy of the Muslim-Muslim ticket.

“It is an act of aberration in desperation to serve its payers, hence Governor Simon Bako Lalong’s despicable statement seeking justification for his actions, which is within his rights, but not to the detriment of the collective sensibility. other Catholics in Nigeria and around the world.

“We are tempted to believe that Governor Simon Bako Lalong wants to stir up religious tension in the country to pit the Catholic and Protestant communities against each other in an unhealthy debate over the APC’s Muslim-Muslim ticket.

“The APC’s desperation in forcing its Muslim-Muslim ticket down the throats of Nigerians is alarming, and more curious is the fact that Governor Simon Bako Lalong, a practicing Catholic who supposedly knows that the Catholic Church does not is not involved in partisan politics but still went ahead to insinuate that the pope supports his decision smacks of mockery from the revered Catholic Church in Nigeria and around the world.

“Concerned Catholics in Nigeria find Governor Bako Lalong’s statement distrustful and capable of provoking a crisis of unimaginable proportions in the country in an attempt to distract and divide the Christian community which has vehemently rejected any narrative that the APC wants to push forward in justification of his Muslim-Muslim Note.

“Governor Lalong displayed a tendency that he does not identify with the country’s religious sensibility. He continued as the typical politician who thinks only of himself and his immediate family and does not care about the consequences of his actions on the overall psyche of others, as in this case.

“It remains baffling to the Catholic community that a supposed knight would deign to throw away everything that has been dear to him for decades because he wants to remain politically relevant after his tenure as Governor of Plateau State.

“Concerned Catholics in Nigeria condemn such despicable conduct as it does not reflect the position of the Pope and the Catholic Church in Nigeria and the world regarding political permutations in Nigeria.

“Therefore, Lalong must therefore apologize unreservedly to the Catholic community in Nigeria for dragging the Pope into the troubled waters of Nigerian politics. It remains unjustifiable and equally reprehensible.

“Concerned Catholics in Nigeria wish to state unequivocally that Lalong does not represent the Catholic community in Nigeria, as his membership in the Catholic Church remains suspect and is under further investigation.

“We are also using this medium to demand the suspension of Lalong from the Catholic Church for having discredited the Church and slandered the Pope’s name for his benefit and that of his party, the All Progressive Congress.

“Leaders of the Catholic community in Nigeria must ensure that Lalong is compelled to atone for his blasphemous statement about the Pope and the Catholic Church in public.”