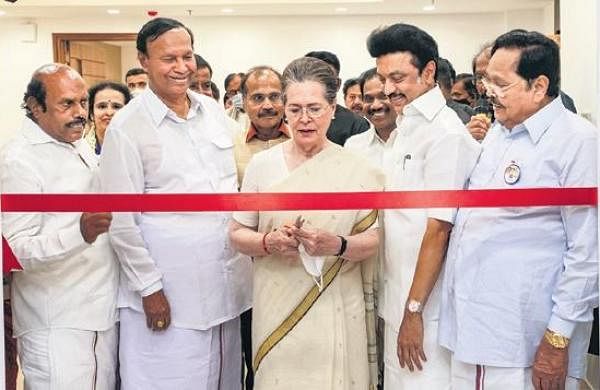 CHENNAI: Leaving a strong political footprint during this three-day visit to the nation’s capital, DMK Chairman and Chief Minister MK Stalin on Saturday inaugurated a new office for his party – Anna-Kalaignar Arivalayam – in New Delhi in the presence of a galaxy of opposition party leaders. Although BJP leaders were invited to the event, they did not show up. DMK office is located at DDU Marg on Minto Road in New Delhi. The inaugural function began with Stalin hoisting a huge party flag in front of the office building.

“A momentous occasion for the DMK, the party which upholds the ideals of social justice, equality and state autonomy, to have inaugurated our office in New Delhi. I want to thank everyone for being part of this historic and joyful moment,” Stalin tweeted after the office was inaugurated. Congress President Sonia Gandhi lit the a lamp and inaugurated the Perasiriyar Library within the DMK office. On this occasion, N Ram, director of The Hindu Publishing Group, published the book Karunanidhi: A life, written by senior journalist AS Panneerselvan.

Stalin had earlier called Prime Minister Narendra Modi and Union ministers Amit Shah, Rajnath Singh, Nitin Gadkari, Nirmala Sitharaman and Piyush Goyal and demanded funds owed to TN. He had also visited a model school in Delhi and said that similar model schools would be established in TN. Stalin stressed that the DMK cannot be separated from national politics.