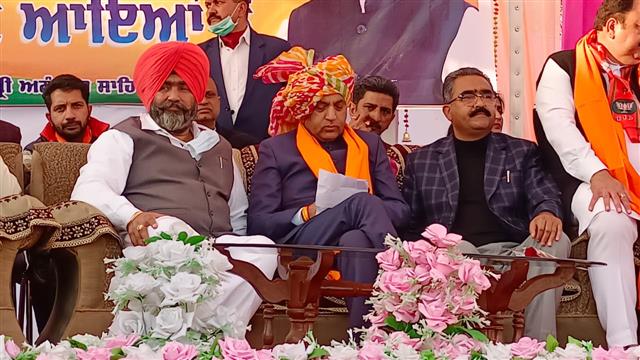 Himachal Pradesh Chief Minister Jai Ram Thakur said today that Congress will have to “pay the price for compromising” Prime Minister Narendra Modi’s security during his January 5 visit to Ferozepur, not only in Punjab but all over the country.

Thakur, who was in Anandpur Sahib campaigning for BJP candidate Dr Pariminder Sharma, alleged that the Congress believed in vendetta politics. He also addressed rallies in Garhshankar and Dasuya of Hoshiarpur district in support of party candidates.

Blaming the Congress government for the drug threat, he said he ignored the state’s youth as a result of which they fell prey to narcotics.

Taking on the AAP, the HP CM said Arvind Kejriwal’s claims about development in Delhi were misleading. He said AAP leaders should visit Himachal to witness the “real” development.

He also announced that a memorandum of understanding for a ropeway from Anandpur Sahib to Naina Devi has already been signed and works will start soon.

Addressing a rally in Binewal Jhungian in support of Garhshankar candidate Nimisha Mehta, he claimed that if people want to make Punjab drug-free, the BJP-led alliance must take power. He said a four-lane road network would be set up between Anandpur Sahib and Naina Devi. —